In response to growing concerns about climate, biodiversity loss, pollution and growing inequality, we have seen government bodies in Europe and the United States propose “Green New Deals.” The aim of these deals is to decarbonize and keep the climate crisis to a minimum whilst creating employment and ensuring a just transition.

The Green New Deal resolution was delivered by Democrats Alexandria Ocasio-Cortez and Edward J. Markey on February 5th 2019 under the title Recognizing the duty of the government to create a Green New Deal. The resolution was non-binding, meaning that even if Congress approved it, nothing would materialize into law. On March 26th 2019, the resolution was denied in a 57–0 vote with many criticisms coming from the ability to fund the deal and the potential increased taxes and its subsequent impact on the economy.

The key focus areas of the Green New Deal were around decarbonizing the economy through the phasing out of fossil fuels and transitioning to 100% renewable energy. The resolution also aimed to fix societal issues such as economic inequality, poverty and racial injustice. Some of the key takeaways from the resolution are:

On December 11th 2019, the new European Union commissioner Ursula von der Leyen presented the European Green Deal. The Green Deal resets the Commission’s commitment to tackling climate change while also transitioning the economy towards a new growth strategy. “Our goal is to reconcile the economy with our planet, to reconcile the way we produce, the way we consume with our planet and to make it work with our people,” Ursula von der Leyen stated. The deal has 50 policy measures with a legally binding target of reducing EU emissions to net zero by 2050. The four key ambitions of the Green New Deal are:

The Deal covers ten policy areas which are depicted below with an accompanying roadmap for legislative release dates: 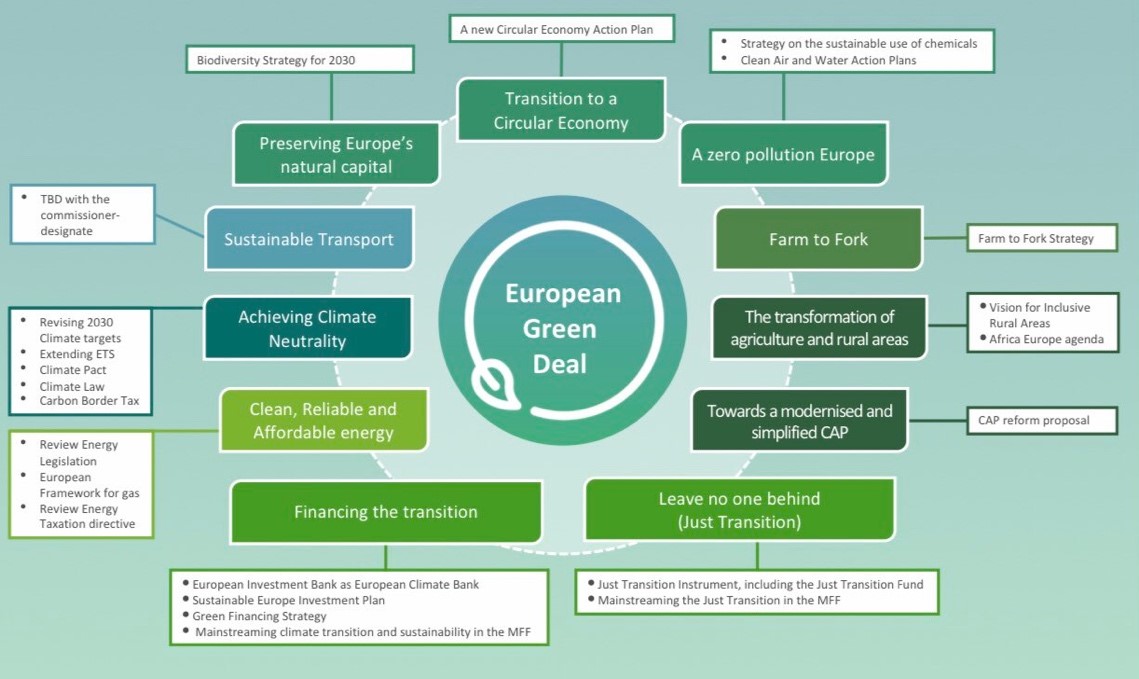 What is the corporate relevance on these policies?

Fostering sustainable innovation and creating new business models creates an opportunity for business to differentiate and capture new markets. The EU is encouraging entrepreneurship and innovation through tax reform incentives that could encourage sustainable behavior.

Leveraging digital innovation is a key focus of both deals; the EU emphasize the need for digitalization in the fight against the climate crisis and to transform the economy to meet their ambitions. Digital and disruptive technologies can play a key role in delivering climate ambition and the private sector can be the fundamental enabler.

The focus of both these policies is around reducing GHG emissions, and consequently there is significant appetite for low-emission technologies and sustainable products. The private sector will be able to capitalize on new markets and jobs that will emerge in the face of the transition to decarbonize these economies.

Climate change is a global issue and cross-border collaboration and action is necessary. The proposed deals both back the need for international partnerships to tackle what is a global, borderless crisis. “The involvement and commitment of the public and all stakeholders is crucial to the success of the European Green Deal” (EU Green Deal, page 22). Green alliances form part of the EU strategy in terms of collaboration as they look to strengthen sustainability policy globally. The focus here is for partnerships in Africa, Latin America, the Caribbean, Asia and the Pacific.

Digitalization is a key driver of climate action and with smart infrastructure comes the need to implement cross-border collaboration. If there are international leaders who do not share the ambitions of one another, issues such as carbon leakage become a risk and the vision of these policies become ineffective. Collaboration will also necessitate redefining of trade policies to ensure imports comply with the standards of the respective nations in terms of their sustainability ambitions.

A significant component of any green policy is the need for more robust and transparent sustainability reporting. The desire for reliable data is imperative to the ambitions of both policies and is something that organizations need to be conscious of in terms of the impact of these policies on their operations. The EU in particular has outlined 50 policies that will form the basis of their Green Deal. Additionally, they are proposing a new Climate Law that will underpin their Green Deal. The Art of Alignment highlights investor calls for a standardized methodology that will encompass sustainability reporting and deliver trustworthy data. The report suggests robust data can help organizations better communicate long term value, understand sustainability and improve stakeholder communications. In so doing businesses can avoid green washing and make sustainable investments more tangible and accessible, which will drive capital towards them.

The magnitude of investment required (€260 billion annually in the EU) to deliver the ambitions of these policies requires the mobilization of both the public and private sector. The use of sustainable investment funds is vital to driving sustainable transformation.

One way to do this is through effective carbon pricing. The idea is that this will stimulate behavioral changes and foster public and private investment as climate risks are priced in. The CDP has extensive data on carbon pricing and believes by putting a price on carbon, decision makers are able to effectively make the transition to a low-carbon economy a core part of business.

Long-term signals are crucial for driving capital to green investments. Importantly, classification of green investments and transparency of data is needed to encourage capital inflows. In the EU, the rulebook is set by the EU Taxonomy. Investments that are easily identifiable as sustainable make it easier for investors to know which are credible and thus to invest their capital. The EU currently provides 40% of the world’s climate finance and the hope is that through policies like these, more countries and regions will deliver the investment that is needed.

The visions of these polices are grand and with any change of this magnitude, trade-offs need to be managed to ensure nobody is left behind.

Ensuring a just transition is prevalent in both pieces of policy. The visions of these polices are grand and with any change of this magnitude, trade-offs need to be managed to ensure nobody is left behind. According to an article published by SustainAbility Benefits for All: Engagement for a Just Energy Transition under-resourced communities bear the brunt of climate change. It is the role of all stakeholders, including business to ensure the transition is just, in the EU, this will be backed by the Just Transition Mechanism. This will focus on social and economic costs of the transition in areas that are most impacted and will support business in projects, re-skilling redundant employees and support the creation of new workplaces.

Governments are calling for private sector mobilization and support in tackling the climate crisis. There is an opportunity for business to play an active role in transitioning the world towards a low carbon economy, while ensuring no one is left behind. The Deals propose radical changes which presents a huge opportunity for business to innovate and create new markets, while also making a significant contribution to the fight against the climate crisis.